To bring long-term value for clients, companies need to continually reinvent themselves.

This quote comes from an IBM announcement that it was selling its PC business in 2005.

IBM’s business was moving towards services, and it was less dependent on hardware sales. But it still needed hardware to provide services for its clients.

The deal let IBM focus on its future. Lenovo got the ThinkPad brand, engineering talent, and a sales channel. This was one of those rare win-win scenarios they teach in business school.

Apple is no stranger to reinventing itself. Thirty years ago, it was selling a $15,000 printer. 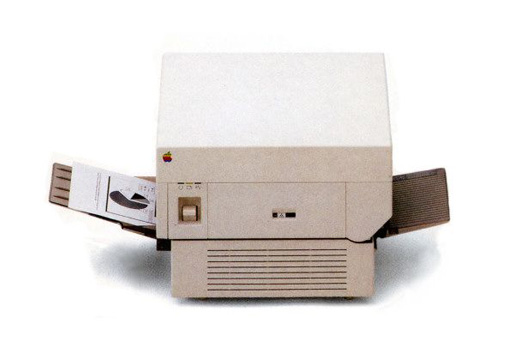 It was a beautiful device that produced stunning output. It launched the desktop publishing revolution and established Adobe as a central figure in the software ecosystem.

And today you can’t buy a printer with an Apple logo.

Someday soon, we’ll look back wistfully at those beautiful displays Apple used to make. With the announcement of the new LG partnership and displays, we’re seeing another part of Apple’s business being outsourced.

Maybe it’s time that Apple does the same thing with the Mac Pro business described by Marco Arment.

Like IBM, Apple is in a bind. Its future and the bulk of its revenue depend on mobile devices. Yet we can’t make these products without the horsepower provided by the Mac.

Besides Apple’s own internal needs, there are many professionals creating content for mobile devices. These folks need fast and capable computers to create apps, music, and videos. We all need powerful Macs to enrich the mobile ecosystem.

John Gruber said it best, “It’s the heaviness of the Mac that allows iOS to remain light.” But will iOS pick up this heavy load by the end of this decade? I don’t see it happening with my own work.

Licensing just the operating system was a disaster for Apple. Professional customers don’t have the time to build and maintain their own Hackintoshes. Any partnership to build Mac hardware would need to be structured so that it benefits Apple, the partner, and customer alike.

Just like IBM and their clients have benefitted from Lenovo.

If you’re an app developer, you’re already aware of how difficult it is to build a sustainable business. Yesterday, we tried something new.

The root of the problem is that frequent updates makes a better product and happy customers, but it also takes time and effort:

The code behind all those updates doesn’t come for free. And increasingly, our customers are realizing that the long-term viability of their favorite apps is at stake. The new tip jar in Twitterrific is the result of people asking how they can support our work.

The idea of patronage isn’t new. The success of this model depends on having a well established customer base who loves what you do. You also need to be careful about how you ask for people’s support: anything that’s annoying will do more harm than good.

If these prerequisites sound like they fit your app, I’d encourage you to give patronage a try. Don’t be afraid to ask for money from the people who value your work the most.

Something tells me that there were a lot of Apple Watches under the tree this year: 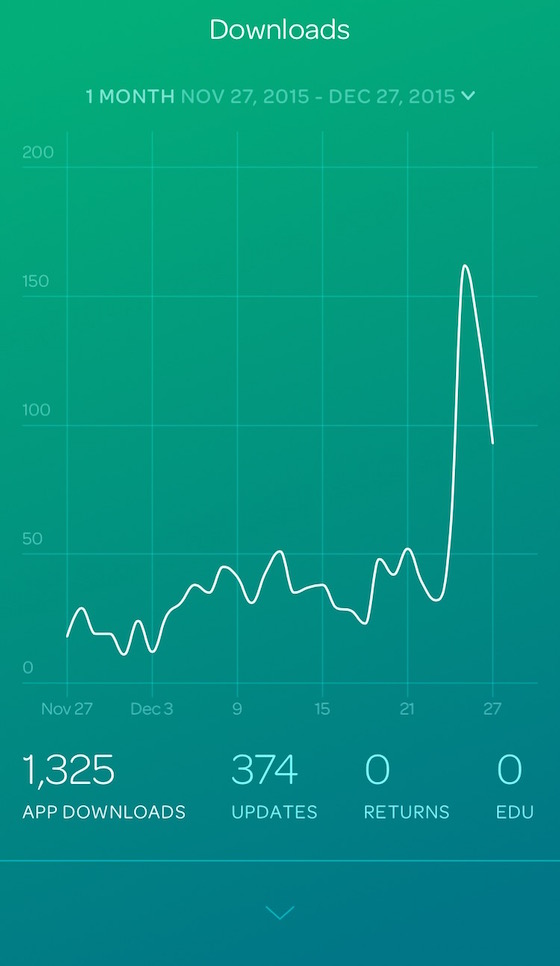 That graph shows the last month of downloads for my free Clicker app for watchOS. Since this app does nothing on an iPhone or iPad, the only reason to get it is if you have a new watch.

Many of us, myself included, originally thought of the Apple Watch as a device in and of itself. But the more I use the computer on my wrist, the more it feels like a satellite to the computer that’s sitting in my pocket.

Accessories have always made great gifts for folks who love their computers. Giving the watch as a gift is a perfect option for someone who’s always playing around with the apps on their iPhone. Just like the iPod was an ideal match for someone who loved playing music on their desktop computer.

Flare 2, our Mac app for photographers that was awarded Best of 2014, is currently half price as a part of the Mac App Store’s Amazing Photo + Video promotion.

In addition, the app was recently updated with German and Japanese localizations. The app continues to be a showcase for good design on Yosemite.

For all the latest info about this award-winning app, be sure to check out the Flare Tumblr.

I have to admit that the thought of car designed by Apple is enticing. But as Jean-Louis Gassée points out, it doesn’t make financial sense.