Like many of my fellow developers, I am in the middle of an update of an app for iOS 7. As you’d expect, it’s a lot more work than previous versions of iOS. But results are stunning: both David Lanham and I have commented that our shipping version was “feeling old and clunky.”

While cranking along on the update, a couple of thoughts occurred to me: how many other developers were doing the same thing and were they going to commit fully to iOS 7? The depth and breadth of the changes in iOS 7 makes it difficult to support older versions of the OS.

So I just asked. I also included a simple question that any developer who was actively working on an update would be able to answer as a sort of CAPTCHA.

After a little over 24 hours, I had my answers: 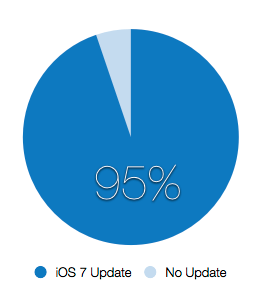 An overwhelming number of developers are updating apps for iOS 7. Of 575 valid responses, 545 developers indicated that they were working on an update for iOS 7. That’s an adoption rate of 95%!

Of those developers who were working on an update, I then calculated how many were going to require iOS 7 (and drop support for iOS 6): 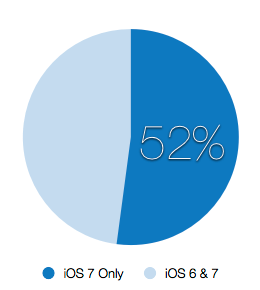 Just over half of developers (284 of 545) were leaving the past behind. Initially I was surprised that this number was so high, but then I remembered how much time and effort I was putting into my own work :-)

If you’re a consumer of apps, this is great news: it’s likely that your favorite apps will be ready for action come this fall. If you’re someone who has a device that’s a couple of years old, now’s the time to start thinking about upgrading. Many apps will require a device capable of running iOS 7.

After I posted the survey, I heard from several game developers who complained that they didn’t know the answer to the trick question: UIView -tintColor is only used in traditional interfaces. Most of the difficulty in adapting apps is changing navigational and content elements to match the new style. Games don’t have this problem: they’re basically all content. Considering these facts, my guess is that games will have much broader support for older versions of iOS.

If you’d like the raw data and my analysis using Numbers, here you go: iOS_7_Updates.numbers