It’s that time of year: Apple has just released a bunch of amazing new things and we start poking at them. And of course, we encounter things that don’t work like we’d want or expect.

Apple’s engineers like to remind us that there’s a good way to handle that situation. You’ll also see a lot of bug report numbers pass by on the Twitter and Facebook feeds as your colleagues ask for duplicates. We’ll all be spending a lot of time writing Radars.

Now’s the perfect time to start using QuickRadar. As its name suggests, this project run by Amy Worrall, makes creating or duplicating bug reports much quicker. You’ll also find that a native Mac user interface is much easier to deal with than some web form pretending to be iOS 6.

The QuickRadar icon can be shown in your dock or in the menu bar. When you click on the icon or use the global hot key, you’ll be presented with the following UI: 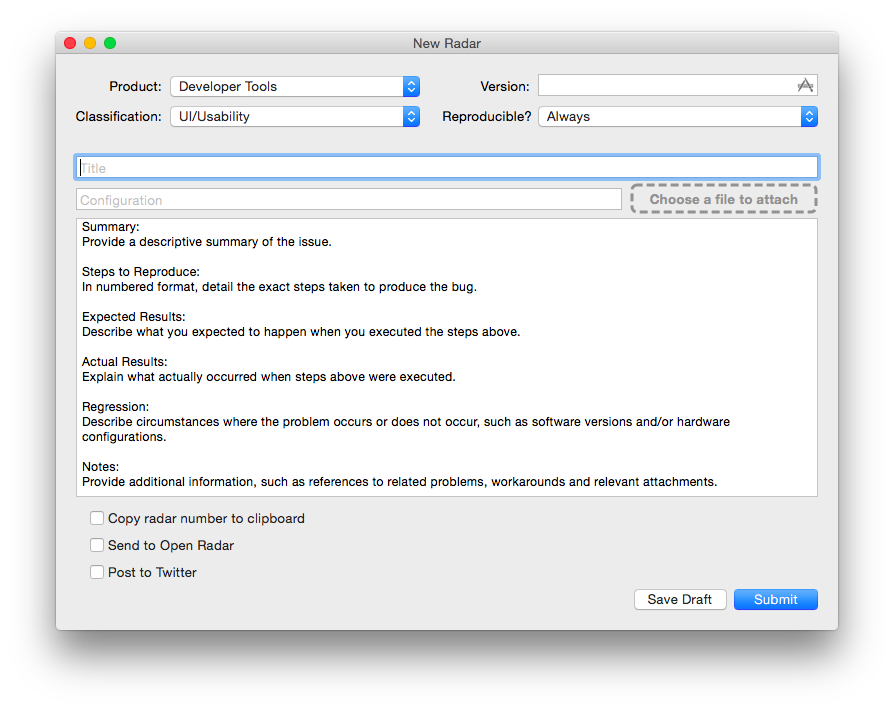 Note: Since Apple doesn’t provide an API for Radar, the app works by scraping web pages. You’ll need to enter your Apple ID and password in Preferences before you can submit a bug report (and you have the source, so you know exactly how those credentials are being stored and used—it’s all done securely.)

Just fill in the fields and hit Submit. If you have your own internal bug tracker or want to document a workaround, you’ll probably want to copy the Radar number to the clipboard. Sending the bug to Open Radar is awesome if you want to let other developers know about the issue and/or get some duplicate bug reports.

If you want to duplicate a Radar, all you need is the bug report number. For example, say you want to complain about the new developer website being a huge pain in the ass. Just select File a Duplicate… from the QuickRadar menu and you’ll be presented with: 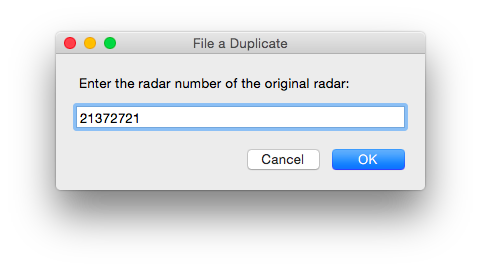 After entering the bug number, the user interface will be pre-populated with the information from Open Radar along with a header saying “This is a duplicate of rdar://21372721”. Click Submit and you’re done.

We all know that writing bugs takes time away from doing more interesting things, but it’s still our best way to affect change from within Apple. With these tips, you’ll be able to get back to coding as soon as possible!