The new Devices window in Xcode 6 has been a constant source of grief for the past few months. Getting device logs was an exercise in frustration which usually resulted in me admitting defeat (and without my logs.) 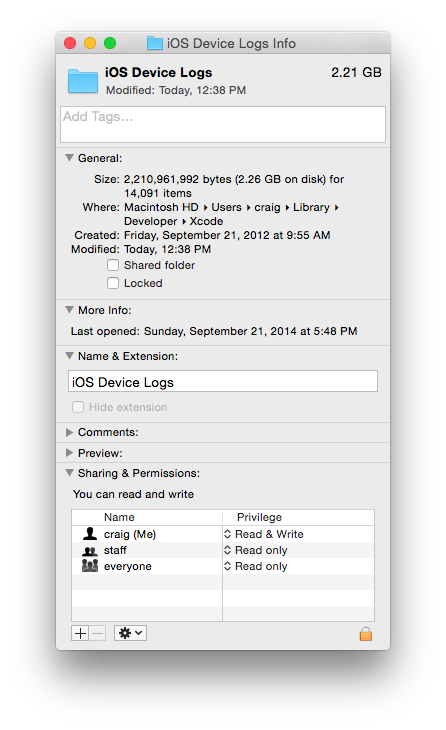 I’ve been developing iOS apps since the beginning of time. I had over 7,000 crash logs in my ~/Library/Developer/Xcode/iOS Device Logs folder! Every time I opened the new Devices window Xcode would tell me it processing some very old crash logs: at one point I saw one from 2008 go by! All this useless work prevented me from getting to the most recent reports.

It appears that newer versions of Xcode store the crash reports in a Core Data SQLite database. Both the raw and symbolicated reports are kept in the iOS Device Logs folder:

I first tried removing all the old .crash files. Xcode still insisted on processing, so it must be working on stuff already captured in the SQLite database. When I removed the most recent database, I was greeted with an Xcode hang after clicking on the “View Device Logs” button.

A spindump showed that Xcode’s DTDKCrashLogDatabase class was doing a -performBlockAndWait: on the main thread. I’m guessing that Xcode was trying to copy over databases from previous versions as some kind of migration process.

In the end, I removed everything in the iOS Device Logs folder and can now use the Devices window as it was intended.