Very simply put, you can no longer sign a bundle (like your .app) if any nested bundle in that package is unsigned. These nested bundles are things like helper executables, embedded frameworks, plug-ins and XPC services.

The result is that you’ll need to update your Xcode projects as soon as you start building on 10.9. It’s taken me several days to understand what these changes are, and with the help of Perry Kiehtreiber on the developer forums, I’d like to share what I’ve learned.

(Yes, I realize this essay is going to break the NDA, but since Apple is asking us to submit apps for Mavericks, I want as many developers as possible to avoid the utter confusion I faced earlier this week.)

So what happens when you do your first app build on 10.9 using Xcode 5.0.1? If you embed a framework that’s unsigned, like the very popular Sparkle.framework, you’ll see a message during the final CodeSign build phase:

The codesign command is reporting that “code object is not signed at all” and Xcode is adding the “In subcomponent” to tell you which framework is at fault (it could just have easily been HockeyApp or any other third-party framework you use.)

So how do you go about fixing this?

In the past, many developers have relied on codesign‘s --deep option to make sure the entire bundle is signed. Specifying this option in “Other Code Signing Flags” will get rid of the error during the build, but all you’re doing is just postponing the pain.

In fact, if you try to download and install the resulting app, Gatekeeper will notify your customers that your app is damaged and can’t be opened, with a default button to move it to the Trash: 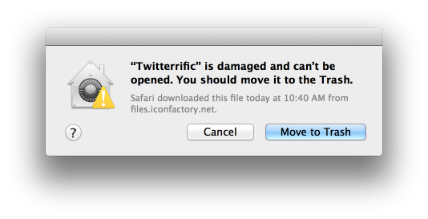 You’ll see the same thing if you check the binary using the command line:

What’s the right way to make sure the embedded framework is correctly signed? The answer is to add another Build Phase to your target.

If you’re embedding frameworks, you’ll have a “Copy Files” phase that moves things like Sparkle.framework into the Frameworks destination. Just after this Build Phase, add a Run Script with the following shell commands:

This short script tells Xcode to sign the framework that’s just been copied into the build product. In this case, it’s using the Developer ID for Gatekeeper. If you were doing a build for the Mac App Store you’d use your “3rd Party Mac Developer Application” identity. Add a codesign command for every framework you use.

If you have other embedded code, such as helper executables, plug-ins or XPC services, you’ll need to sign them appropriately after copying them into your app bundle.

You’ll want to do a quick check of the build product before uploading it to either your website or iTunes Connect. The first thing you’ll want to do is check the signed bundle meets its designated requirement:

If there’s a problem, you’ll see a message that the app “does not satisfy its designated Requirement”. To view information about the signed code or the designated requirements, you can use these commands:

If this is a build you’ll be uploading to your website, you’ll want to make sure it will be accepted by Gatekeeper (and not display the “damaged” dialog.) Use spctl to do this:

If this is an App Store build, you MUST check the .pkg file that gets uploaded to iTunes Connect (see the next section and you’ll see why I say MUST.) If you use productbuild to create the package manually, you’ll already have a .pkg file to test.

For those of you who submit archives directly from Xcode, you can generate the .pkg file using the command line:

You can find the path to your .xcarchive by selecting it in the Organizer and then using the Editor > Show in Finder menu item. The command above will create a /tmp/CHOCKS.pkg. Yes, you now have CHOCKS PACKAGE IF YOU KNOW WHAT I MEAN

(A quick side note, if you use xcodebuild, it got a lot of love in Mavericks. Make sure to check out the man page.)

To check out CHOCKS.pkg, run the installer with the -store option:

Now, sign out of the App Store and launch the app that was just installed in your Applications folder. If everything is OK, you’ll see the prompt for your Apple ID and a receipt will be written in the app’s _MASReceipt folder.

(For more information on testing installer packages, check out the Testing section in my Mac App Store Guide.)

After being installed for the first time, some apps never get a receipt when they are launched on Mavericks. The app starts up, sees that there’s no receipt in /Contents/_MASReceipt and signals that it’s missing by exiting with a 173 code. Normally, storeagent will recognize this and prompt for an Apple ID. After valid credentials are provided, the receipt is written and the app is launched again.

Several developers, myself included, have noticed that after exiting with a 173, only the following is logged in the console:

If this happens to you, it seems your only course of action is to not validate the receipt. Your code will launch fine if you never return a 173. Which, of course, sucks because it’s then trivial to pirate your the app.

For any Apple folks that might be reading this, check out the Radar: rdar://problem/15254213

Updated October 18th, 2013: Developers that are doing their builds on 10.8 also need to watch out for this problem. As a workaround, I tried building the product on 10.8.4 using Xcode 5.0. The resulting .pkg exhibited the same behavior at launch time as the one created with the Xcode GM on Mavericks.

Updated October 18th, 2013: It looks like this bug happens when you precompile your Info.plist. Thanks to Chris Liscio for verifying that problem. Make sure to dupe it, if you’re affected!

As to why you’d want to precompile your Info.plist, there are two good reasons.

There you have it: a short summary of my last three days of confusion caused by new Gatekeeper requirements, issues with Xcode and bugs in Mavericks. Hopefully, this essay will save you some of that same agony.